People have wondered how my relationship is with my biological father now.  Well, like the Facebook relationship status option, I would say, “It’s complicated.”  But initially, when my father returned to the Philadelphia area after being released on parole, I was happy for him and happy to get the chance to reconnect with the father I hardly knew.

As a little girl, I had a very good relationship with my father before he moved away.  He adored me and treated me like his little princess daughter.  I was still young, sweet and innocent when he committed his crime.  Surprisingly, my mother encouraged my relationship with my imprisoned father.  She fostered our correspondence against the wishes and biased concernment of her family, and I wonder why she thought it was so important for me to stay connected to the man that left me when I was four years old, and murdered his pregnant girlfriend shortly thereafter.  I didn’t know anything that had happened though.  To me, he was the same man that I ran to as a small child, the one who would pick me up and toss me in the air, kiss me and say wonderful things that a father tells his child. 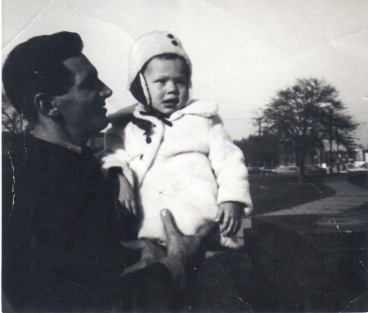 Daddy was very good at communicating his feelings on paper.  He had published numerous poems, short stories and was well known and respected not only among his inmate friends but among the guards and the local society.  His letters were warm, loving, and affectionate.  Letters was all I had that connected me to my father.  While my siblings had a “real” father in their life, my father was on paper, like a story book or a magical dream.  You might say I was living a fairy tale.  I had endless verbal love and written paper affection but no tangible substance to validate the relationship.

When I was nine, mom got remarried.  Together, they added two more children.  And it was yet another reminder of something they had that I didn’t.  I remember the time when my two younger brothers learned that I had a different dad.  My siblings and I we were sitting around, talking and one said, “I thought you, Keith and Colleen had the same dad.”  In fact, school friends and even some family members thought the same thing.  People knew we were a blended family.  They just didn’t know how blended.

No one spoke much about my father, including me.  Most conversations were discussed quietly with my mother in another room or upstairs in my bedroom with my sister.  When I did mention my father, I would get the look.  I knew how my parents felt.  I could see it in their eyes.  I knew people whispered about me or my dad in secret.  How could they not?  When the family saw me, they were reminded of my father.  Maybe that’s why my stepdad had a hard time accepting me.  I was the only brunette in the family and I did resemble my father.  But what no one seemed to understand is that I would have forgotten all about the imprisoned father, if only I was shown genuine love and affection in my home.  That’s all I ever wanted and desperately needed as a young girl.  My two older siblings had a real father they could visit, and my two younger siblings had a real father living in our home.  But I had nothing other than what I received on a piece of paper.

So, in a way, it was like having an affair with my father.  He was someone who could easily tell me about his love and affection for me, something that was seriously lacking from my stepfather; however, he was unable to back it up with real affection, real love, real nurturing as an ordinary father provides in the “normal” sense.  There was no commitment.  It was a deceptive reality.

Here I was living with my stepdad who showed no compassion or support for me with regard to my absent father, along with many other social behaviors and dysfunctions that I carried within me, and then there was this magical father, somewhere far away, who told of how much he loved me, how beautiful I was, how smart I was, and how he couldn’t wait to see me so we could be together again.  Maybe it’s just me, but that sounds like the classic love affair with one very big exception, there was no sex involved.  But in affairs, personally I think it has more to do with the emotional connection that keeps a person coming back than the sexual connection.  It’s about a deficiency and belief in something hoped for but not yet seen.  Sounds like faith right?  Well, not exactly.  Faith is something we give to God.  An affair is a dark secret and a desire.

At twelve, I went to visit my dad.  My parents allowed me to board a plane to Florida to learn the truth and figure this out on my own.  This trip would change my perception of my father and my perception of myself.  Learning about his crime and prison sentence made me question many things about whom he was and who I was.  I still loved him as my father.  But was it right to love a man who murdered someone?  I was twelve.  How does a twelve year old rationalize this opposition?  When I left New Jersey, my dad was my hero.  When I left Florida, I didn’t know who my dad was but I was pretty certain he wasn’t the hero I imagined he was in my storybook dream.  And if he was a murderer, than what was I?

By my junior year in high school, Dad returned to the Philadelphia area and we immediately began to work on rebuilding our father/daughter relationship.  For the first time in many years, I had a real person that I could show to people and say, “This is my father.”  Not a letter, not an imaginary parental figure or fairy-tale creature but a real person.  Despite his crime, he was a free man now.  He paid his debt to society.  He was rehabilitated.

It wasn’t easy to rebuild our relationship on an already fragile foundation.  For one, Dad saw me as the little girl he left behind.  But I was a teenager now and quite liberated.  Maybe after hearing how my father physically and verbally abused my mother and seeing a live-in-boyfriend shove her up against the wall one time and bang her head repeatedly, and then seeing my stepfather bully and intimidate her with his words, I just knew that I did not want any man to run my life like that.  No way, no how!  So my father and I bumped heads on occasion.  But he bumped heads with my older sister, from his first marriage, too.  She and I were a lot alike in that sense.  Mario loved his little girls.  But once we became women and had a mind of our own and could think for ourselves, well now, that was a complete different story.  And thus, the trouble began.

I saw my father go from a one room, literally one room big enough for a twin bed to a spacious three-bedroom apartment within a few years.  I gotta give it to the man.  He is smart and very ingenious.  He worked hard and became the owner of a limousine airport transportation service company.  My sister was working for him and he offered me a job to work the front office on dispatch.  Looking back now, it wasn’t the best job for a hearing impaired person who at the time didn’t even have hearing aids.  The drivers had to repeat the information several times.  They got frustrated and complained.  They didn’t know I was hearing impaired.  No one told anybody I didn’t have normal hearing.  I wrote numbers and names down incorrectly and things just went from bad to worse.  This was the beginning of a failed father-daughter relationship; so much for the fairy-tales.

The next major hit our relationship took was when I moved to Texas.  After six months, my live-in boyfriend who I followed to Texas found a job back in New Jersey.  I told him to go on and I would pay the rent and get back as soon as I could settle our affairs.  Shortly thereafter, I decided to call my father to ask for his financial assistance.  Big mistake!

My father scolded me for foolishly following “some man “instead of being independent and staying put in Texas.  A small town girl in a big city, nearly 2000 miles away from my family, in a state, where I had no relatives, no strong support system except that of my boyfriend’s mother and father.  I got infuriated and I began to yell and curse at him.  I reminded him that he had done nothing for me as a child, especially financially, and now I was asking for a loan and he was refusing me?  Then my father tells me, “When you came to visit me during your high school years, we went shopping and you wanted a new coat.  I needed new tires but I bought you that coat instead of getting me the tires I needed.”  He actually wanted me to feel sorry for him for buying me a winter coat instead of buying himself new tires, as if I should be eternally grateful for his generous contribution to my wardrobe, his minor daughter and still technically, his financial responsibility.  This my friend, should go down in history.  I felt like saying, “Are you fucking kidding?”  I didn’t but I did however remind him of all the years he spent in prison without ever having to pay one penny towards my well-being.  Not ONE penny.  And when he got out, he wasn’t forced to pay any child support.  He was free and clear.

So we didn’t speak for many years.

After Jaren came along, I reconnected with my father, who had moved back to Florida.  Jaren and I were taking a trip to Florida to visit my cousin.  I called Dad and asked if we could stop by so he could meet his new grandson for the first time.  Jaren loved his grandfather and visa-versa.  They got along well.  And at the time, my stepfather was still not speaking to me and refused to acknowledge my son as his grandchild, so Mario’s acceptance was a warm and welcome feeling.  It was a short visit so I was able to escape before too much collateral damage was done.

But the straw that broke the camel’s back was when I wrote One Woman’s Choice.  Mario didn’t like the book and thought that I pictured him in negative light while painting my stepfather in a more positive light.  I was dumbfounded at first.  I was thinking, “Did you even read the same book I wrote?”  His words were very harsh to me, something that no daughter should hear from her father.  Then to close the deal, he said he was removing me as executor of his will and any inheritance.

For me, it never really was about the money.  It was the ultimate rejection.

I guess you could say I had three fathers; the one that is listed on my birth certificate, my mother’s first husband, who gave me my last name; my biological father, who gave me life; and lastly, my stepfather, who gave me a home.   I have more fathers than most and yet I don’t feel like I belong to any of them.

But the one father I do belong to is God.  And His love, acceptance, and guidance are magical.  He may seem like a storybook father, but His love is very real.

4 thoughts on “My Storybook Father”