“To understand this increased risk of sexual or physical harm, it is helpful to consider the lack of oversight which occurs when both biological parents are no longer working as a team. Ideally, parents work together to teach children body safe rules, observe children in play particularly with older peers, and thoughtfully choose care providers. Post-divorce, this doesn’t always happen. Another explanation for these increased risks of harm connects to the potential negative/dangerous role older step/bonus siblings can play in the lives of younger children. (Even when sexual or physical abuse by an older step/bonus sibling is not a factor, children who live with step/bonus siblings are more aggressive.) Yet, most significantly, one must face the difficult truth that the primary cause of harm to children in blended family settings is the unrelated, usually male, adult – brought into the mix through romantic involvement with the biological parent.”

Jaren and I have done a lot of service over the years.

I would say my passion for volunteering began when my employer asked me to help organize the United Way Campaign for the employees.  It was a week long event where we shared video’s, personal stories, and the many ways to give and serve.  I had benefited personally from United Way charities like the Good Will store that our mother shopped at from time to time for us kids, as a single mother of three.

I began to get more involved in service when I worked with WaMu. They were a very service oriented company and gave their employees 12 hours per quarter to volunteer during work hours.  It was a wonderful gift. It allowed me to do more, as a single mother. Its harder when you’re a single parent.  Time is so precious. Leave in the morning, drop off your child at school, head to work, put in at least an eight hour work day, plus lunch and then pick up your child and head home to cook dinner, homework, sports, spend time together, get them their bath and ready for bed and do it all over again the next day.

I loved volunteering and serving.  I always walked away feeling good.  So I began to look for service that I could do with my son.  I didn’t want for him to be home with a sitter while I was out volunteering.

We served in many different ways, from awareness/charity walks, to serving Thanksgiving dinners at a homeless shelter, to working with special needs kids and many other various events.  It really was so much fun serving side by side with my son.

However, I did do a few things without my son, like in 2006, Jaren’s school invited me to join their Campus Involvement Committee.  It was a one school year commitment.  I enjoyed that and learned a lot about how the schools work.  I also got to provide input.  It was a great group of professionals to work with.

From 2005-2007 I was invited to join the Community Involvement Team at WaMu and was the Secretary for one of those years.

And lastly, one of the employees of UnityDallas asked me to join their committee to help organize their family event, called Where’s the Beach, which I did in 2008 and in 2010.  I was the volunteer coordinator.  It was about a six month commitment for the planning of the event.

When I resigned from the bank in 2012, I volunteered at UnityDallas, my church, for about nine months, working one to two days in the office, answering phones and handling minor office duties.  It was a lot of fun.

Then, when Jaren got to high school, he began to go even further serving with our YOU youth program at church.  He already had the experience.  And he enjoyed serving.  Even when the folks at the church needed a hand, they knew they could ask him.  When they had Open Mic night for the YOUers, who took turns performing along with adults on a small stage, it was Jaren who worked the sound booth, taking a short break here and there to eat or perform his song.  And when he graduated, he was able to get his service recognition, thanks to his sponsors and UnityDallas.  I will tell you, that meant more to me than any academic or athletic award.

Giving service, whether we are thanked or not, whether we get an award or not, whether someone parades us on stage or not is really irrelevant.  In the end, when I walk before God and he ask me and my son, what we did for his people, we will be able to reply, “We did this and we did it humbly with a grateful heart.” 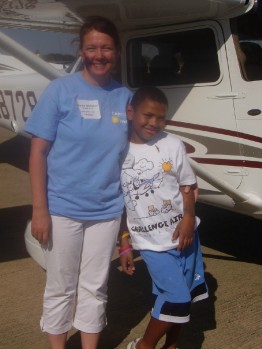 At fifty years of age, you might say I’ve been on a few dates in my life.  Some were good dates, and some….well let’s just say I wasn’t eagerly waiting by the phone.  I can’t say that I remember having a really bad date; or for that matter, a really great date.  In fact, most of them escape my memory.  That is, until the day my five year old son, Jaren, asked me if he and I could go on a date together.

I wish I could remember how exactly Jaren asked me.

At first, I didn’t take Jaren seriously.  I thought the idea would fade but surprisingly, it didn’t.  It seemed like this was very important to him.  How could I refuse such a lovely offer to go on a special date with my son?  I couldn’t. So Jaren and I began to discuss how and where we could have our special date.  Jaren has always had a strong personality and likes to be in charge.  I put on my thinking cap.  I mean, he was only five.  We decided to have our date at our condo later in the week.  I allowed Jaren to plan most of the evening.

The morning of our “special date night”, we got ready for school and work.  Jaren reminded me, “Don’t forget about our date tonight, Momma?”  I assured him that I wouldn’t.

Later that evening, I helped Jaren get dinner ready and set the table.  We got out the good dishes, along with wine glasses and my cloth embroidered napkins, all at the request of my son.  We also set a candle on the table.  On the menu was Tyson chicken nuggets and french fries.  Since Jaren insisted on preparing our meal, I needed to make it as safe and easy as possible, with my supervision, of course.

Jaren also insisted on picking out my outfit for our date.  He had a dress code in mind.  It had to be fancy!   I waited downstairs while Jaren picked out my clothes and then laid them on my bed.  As Jaren strolled down to his bedroom to get ready, I put on my long silver shimmery skirt, an elegant blouse and high heel shoes.  I fixed my hair and make-up and waited at my bedroom door.   Jaren arrived a few moments later wearing his black dress slacks, a white long sleeve collar shirt and a red clip-on tie.  I told him how handsome he looked.  He smiled, returned a compliment, took my hand and escorted me downstairs to the dining room.

We gathered our food and the Kool-Aid (we’ll just pretend it is wine for now), and sat down.  I lit the candle.  Jaren turned on some soft music and then…we prayed.  For the first time, my son was not a five year old boy.  He was a mature, engaging young man.  He ate his food with such grace and etiquette.  I thought, “This is not my child.”

After we finished our meal, Jaren asked me to dance.  We slowed danced and he carefully dipped me at the end.  Afterwards, Jaren escorted me to my room and I thanked him for a lovely evening as I kissed him on his cheek.

My son is fifteen years old now and we have not gone on any dates since then.  But I will always remember our special date.  That night, my son showed me how a woman should be treated on a date, the kind of respect a woman deserves and the kind of love a woman deserves.   I felt beholden to Jaren.  That truly was the best date of my life.